Help, someone stole my blog post! What can I do?

It’s happened to me. Someone stole my blog post. They stole my images. They plagiarized. They were making a profit from my hard work. So what do you really do when someone steals your blog post? What if you just have a feeling they copied you, but it’s their own photos and not quite the same? Or what if they stole an image but didn’t link to you or get your permission?

They’re all questions that are valid. So let’s explore some answers. 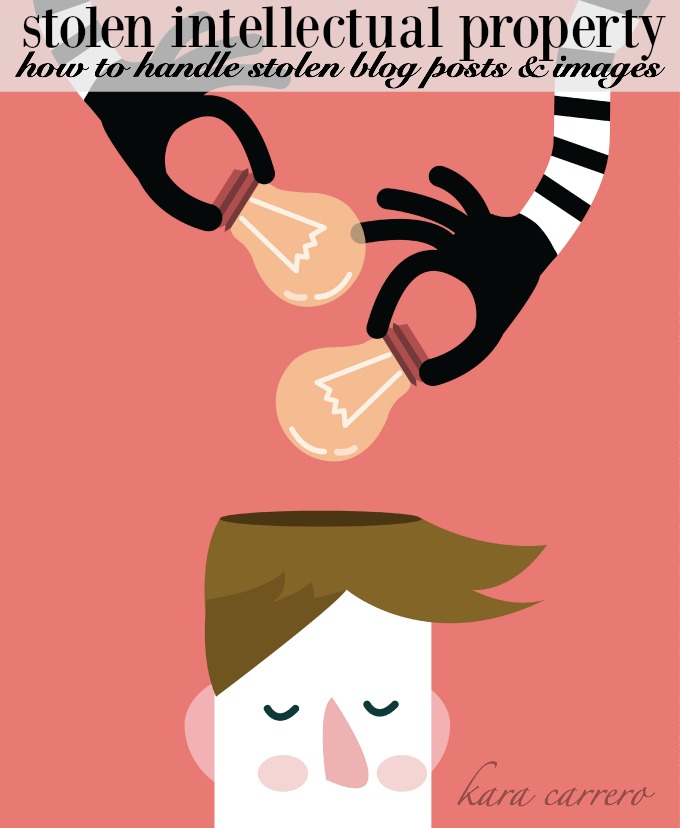 Affiliate links included to be able to pay for the DMCAs sent to people copying my posts and using my pictures!

In the mid-17th century, Isaac Newton and Gottfried Leibniz both derived modern calculus. Yes, the math.

So wait, what does this have to do with someone who stole my blog post?

What you may not know is that they both had blogs. Just kidding.

They derived calculus. Both of them. At the same time. A mathematical method that the common person does not even understand, let alone be able to “discover” on their own.

The two brilliant mathematicians fought over who derived it first, who talked about it first, and who really “invented” the concept. And it’s still debated as the Newton-Leibniz controversy to this day in some respects because there’s no real way to prove when someone began thinking about it, only when they started writing findings.

I mention this historical story because it can help us learn to focus on reality. That unless a blog post is word-for-word the same, blatantly uses your photos, and/or has a record of stealing such things, there is a possibility they came up with it on their own.

Even if the photos look eerily similar.

Before we get to the nitty gritty, angry take-down, let’s evaluate what can we learn from these great minds:

What can I do is someone plagiarizes from my website?

So story aside, let’s talk real details that go beyond letting it roll of your shoulder. Stealing copyrighted images is pretty common and a much bigger deal than most people understand. The average internet user many times thinks that pictures and ideas are courtesy of Pinterest or Google. And of course, you know that’s not the case.

So what’s the big deal about your blog posts getting stolen? Not only are they your intellectual property, but Google can also “ding” you for having duplicate content. And that can sometimes even include when someone copies you and not the other way around.

Protect your #blogpost with these 4 ways to take action when someone steals your content. #blogtips

You can’t copyright recipes or basic ideas, only images and what you’ve written word-for-word.

Yes, it’s possible to copyright and/or trademark an idea you have such as a craft. However, you typically have to prove that you were the first to come up with it. And in many instances that’s very difficult. Plus you have to do your own due diligence in tracking down infringements. Which is tiresome at best.

So the first thing you have to ask yourself is if it’s even worth pursuing.

We all copy ideas in some way shape or form. And not only have many of us been told that imitation is the highest form of flattery, but even one of the greatest minds of our time has been quoted as saying “Good artists copy; great artists steal” (Steve Jobs).

It may be hard to admit someone else could have come up with it all on their own and it may be difficult accepting it without letting it hurt your pride just a little bit. But if you don’t know 100% that it came from you, sometimes the best course of action is to let it go.

(Also, please don’t be passive aggressive with things like “Oh how wonderful. I did something similar to this a few years ago (links to post).” Because in reality, it doesn’t help the situation.)

If you know they have copied you or have a really, really good inclination that they did, reach out to them. In a non-confrontational way you can say you stumbled across their post and their blog. Tell them that you noticed your picture being used or that the text was taken from your post and that you understand sometimes internet rules and etiquette can seem unclear, but that you either 1) do not allow use of your photo outside of our blog or 2) you only allow one image with proper attribution and a link back to your original post.

If it’s text that’s similar, you can reference your post and maybe even a plagiarism checker if you want to be hardcore about it. 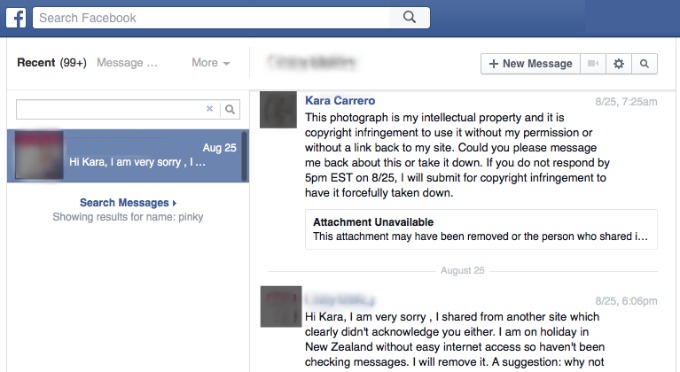 Most people, especially newer bloggers have no idea and will apologetically oblige if they stole from you and know they did.

Sometimes they do not. In this case when I know it’s my image, I typically send them a message asking them to remove it within a certain amount of time or I will take legal action.

If you never hear back via email, you don’t have contact information, or you want a trail of what was sent and when (because contact forms disappear for you on your end), then you can send a private message on facebook.

Most modern businesses, blogs, and websites are going to have a facebook page. Not only does sending them a message allow you to track what’s said, but it also allows you to know if the recipient has read it or not.

And when all else fails and you know for a fact someone stole your images and blog post whether on facebook or on their own site, you can file a DMCA or seek legal advice from an attorney about copyright.

If on facebook however, you also have the option to reporting stolen images (or ones not appropriately linked). They do encourage you to reach out first, but I have had images taken down before because I was able to prove it was my own.

Previous Post: « What every blogger wants you to know – the secret life
Next Post: Create a free voicemail service for your blog, podcast, or personal use