The week social media failed me as a blogger

They say don’t put all your eggs in one basket. They say, you know, the day you start relying on Facebook for traffic and it fails, you’ll be sorry. They say that if you invest only into Pinterest and then it fails, you’ll wish you would have diversified your traffic sources. But what no one talks about is what if more than one social media referrer crashes overnight? What if your traffic is at only 25%, 20%, or even 10% what it was before the social media fallout and failure? Well it happened to me. Social media failed me as a blogger for a week and I received zero pageviews from Facebook and Instagram and abysmal traffic from Pinterest. 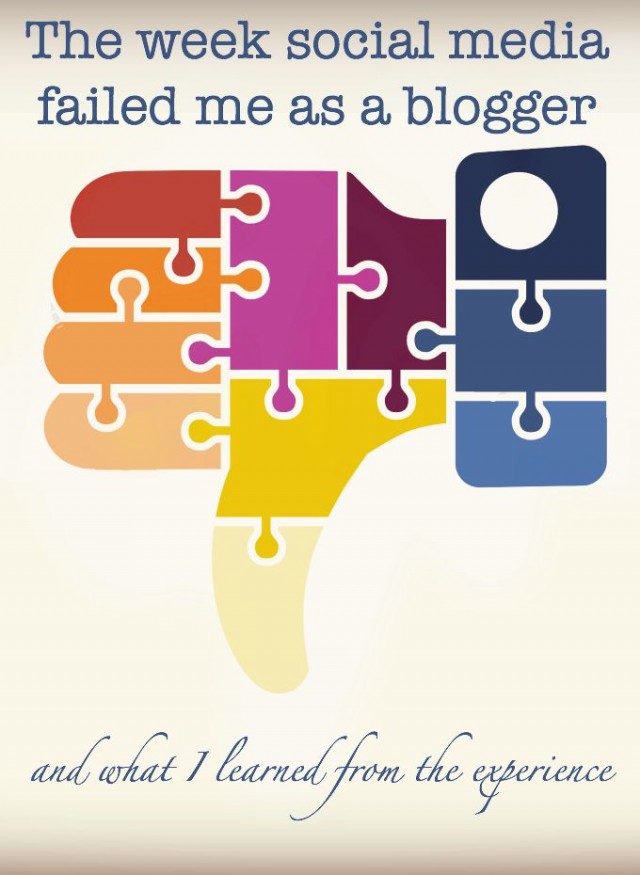 Affiliate links included for your convenience – thanks for supporting me.

What happens when facebook marks a domain as abusive

Because I was entering the weekend and my husband had that Friday off, I was bound to not check my social media all weekend. I had it scheduled out and didn’t have a single worry about it. Then one of my clients sends me a message telling me that when I sent them a message on facebook, it didn’t show up and told them it was tagged as abusive. And then it happened again. And then i noticed that every single link that had my domain name in it not only was n longer allowed to be published on facebook, but they had also deleted every photo, video, and link that had any association with my URL. Even on my personal feed or in personal messages.

Any time I, or someone else, tried to post something with karacarrero.com in it, facebook would give this message that it was abusive or malicious.

I contacted my host to make sure there was no malware and even ran my site through trendmicro to make sure that it was still seen as a “safe” site. Everything was clear. And what was most upsetting was that facebook seemed kind enough to say “if you think this is an error, let us know” , but when I did, their comments basically let on to the fact that they don’t reply to those concerns and they rarely look into them too.

I sent email messages to facebook’s advertising department, because they actually reply to emails. And sure, I have run ads in the past and I would absolutely pay for ads to get my site back on facebook. The problem there was that my site was still listed under my old domain name (that worked), but all content was being redirected to the new domain, which didn’t. So I had to go back and forth with them trying to convince them I had rebranded and my site had indeed been marked as abusive.

And what people don’t seem to talk about either is that pinterest and facebook feed off of each other. Someone finds a great article they loved on facebook, they’re likely to pin it for later. And vice versa. They had a great find on pinterest, so they share it with their friends on facebook.

I even posted something on my main blog page asking my following to do me the huge favor of reporting the link as inappropriately marked as abusive. In fact, I had hundreds, if not thousands of clicks on that link to help me report the problem. So while facebook and social media failed me as a blogger by not letting me post links, I had an amazingly supportive community that rallied behind me both loyal followers and other bloggers.

I had bloggers such as Paula from Beauty Through Imperfection allow me to backdate “teaser” posts to my own content on her site and others willing to let me do guest posts and disperse my content in unconventional ways. 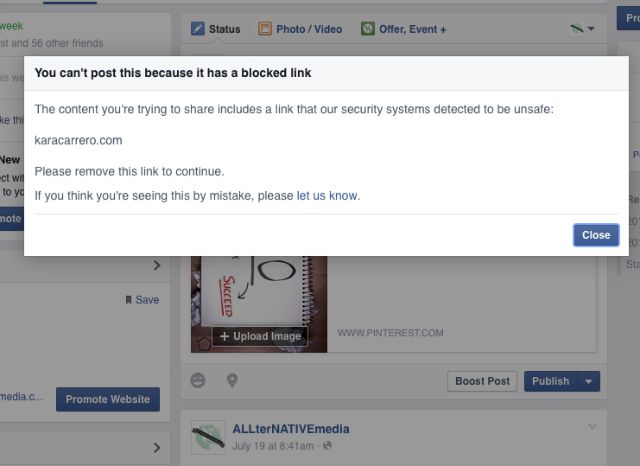 In fact, during this whirlwind of facebook chaos, I sent out a newsletter to my audience. They all rallied behind me. That day I had a 50% open rate and even had a full inbox with 2% actually responding to the email. It was incredible! And while I had worked on focusing on my newsletter for a good year prior, that was the moment I realized I needed it to be my primary focus. Because social media could completely collapse, and not just one platform, but multiple!

Because facebook owns instagram, my site was also blocked on IG. This meant I could not like others photos, comment on them, or post any of my own new photos. And in that time I actually lost about 40 followers… presumably because of the “malicious link” issue. Not to mention that IG is actually a decent traffic referrer for me.

I know that ultimately my domain is back on facebook (and therefore instagram) because I know some amazing bloggers who have contacts in facebook, but which one of those 5 people that reached out to me to get it resolved, I don’t know which one solved it but I am incredibly thankful to all of them!

Granted, this has been happening for a much longer period, but the very worst time was exactly at the same time as the facebook nightmare. While no one quite understands what’s happening, many bloggers has seen several top pins completely go to zero traffic. I have some that go back as far as January 2015, some more in the spring, and then the worst hit for most bloggers has been around July 20, 2015. 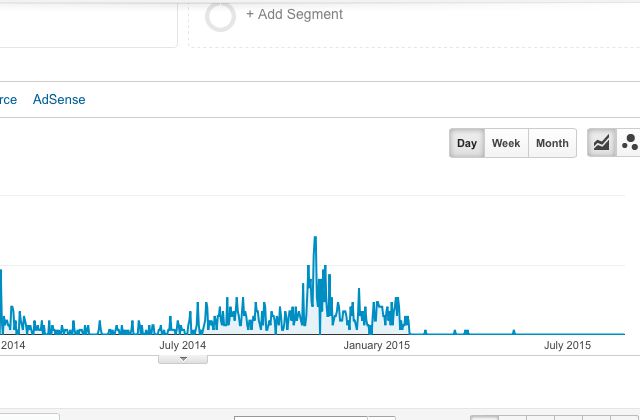 Even though I knew my newsletter was important, I would have paid any price to get both facebook and pinterest up and running in that instant. I would have happily written a check to be able to reach an audience with what i was writing, but that wasn’t an option.

I am still seeing flatlined pins, like many other bloggers. I don’t know that any of us has heard much from pinterest other than their working on the issue. But again, this points me back to the importance of building my newsletter. It’s something I completely own, maintain, and have full control of… which in the end is worth its weight in gold.

While an experience I don’t want to go through again, I was so glad I learned the lesson that it’s not even about putting your eggs in one basket, it’s about putting your efforts where it counts and where you can engage your most loyal readership. So now, I am focusing even more on my newsletter because it is the life insurance for my blog!

I plan on coming back stronger than ever both by focusing more on my newsletter and by working on guest posting for others in my niche. It’s both a thank you to them for supporting and helping me, but also a way I hope to rebound from all of the lost traffic.

You may also enjoy:

How to organize categories, tags, and keywords for SEO
Next Post: What every blogger wants you to know – the secret life »